skip to main | skip to sidebar

The Story Of Rolf 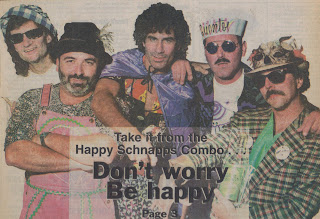 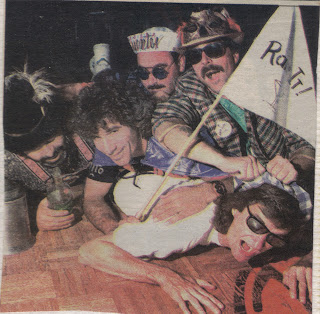 Getting acquainted with the floor at Fox Hills; one of Rolf's favorite places to Dutch Pile with his mates. Another Press Gazette photo. Thanks so much, guys. 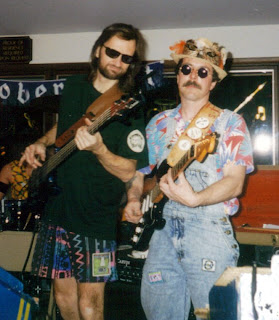 Rolf and Klaus at FebFest, Lake Bluff, Illinois, in early 1995. Rolf had been listening to a lot of Steve Earle at this time, and it reflected in his look. 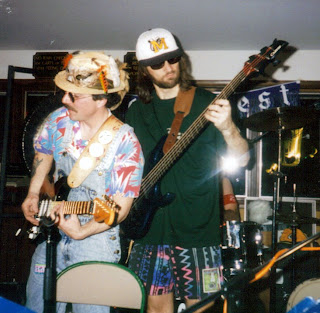 Klaus and Rolf, same place. Rolf is wearing his Skunks cap, a gift from the now-legendary Manitowoc Skunks baseball team. 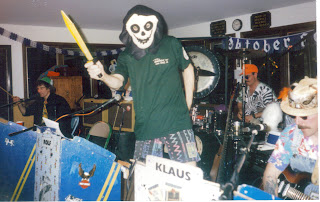 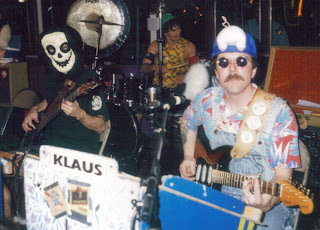 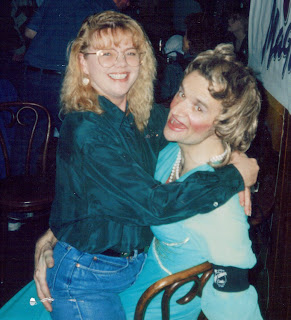 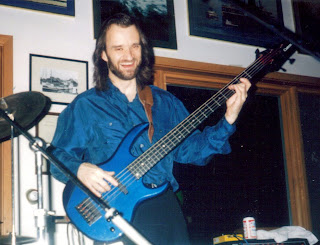 All's well that ends well; back to being Terry, with Brad Schneider's Co-Op at the Manitowoc Yacht Club. 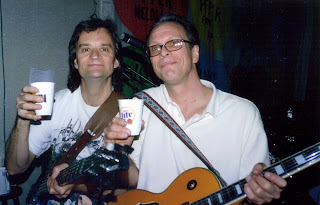 Re-united at last with Helmut; Terry and Dave at Heart-a-Rama, 2003.

Rolf was the stage name for Terence J. Miles during his 10-month tenure as bass player for the Happy Schnapps Combo, from the summer of 1994 until late spring of 1995.

Rolf took his name from one of his heroes, Ralf Hütter from the German electronic band Kraftwerk. “There was also a character in ‘The Sound Of Music’ named Rolf,” he related. “I wanted to call myself Ralf, but I was afraid people would mis-pronounce it like the American ‘Ralph’, so I changed the spelling. I also had an army band buddy in Germany named Rolf Haugrud, whom I used to drink with. It was a tribute to him as well. Haugrud was actually Norwegian, but the name Rolf was still German-appropriate.”

Rolf first heard the Happy Schnapps Combo’s music shortly after they released their first cassette, now titled ‘100 Proof’, in 1991, and was instantly a fan, showing up anywhere and everywhere they spread their brand of joy. Not only did the band actually spread the message of fun and camaraderie through imbibing, which wildly impressed Rolf by being disarmingly audacious in these conservative times, but they did so with extraordinary musical skill. "Suddenly," he says, "someone actually had the balls to say, ‘Hey, let’s raise it and have some laughs,’ and mix it with serious musicianship. Even the prudes couldn’t deny that this band had chops."

But as is wont to happen in this world, fate has a way of affecting things. Rolf still regrets being too intimidated by Otto’s incredible talents to ever approach him for friendship, before Otto was asked to join the great Tavern In The Sky house band.

Otto’s passing caused a period of unrest within the band while the Schnappers searched for a new identity; a way to look forward while retaining its original loyal fan base. In early 1994, Wolfgang, the original bassist, decided to move into a different direction, and Rolf was asked to take his spot in the band. While Rolf was preparing for his new role in the group, the band decided to also replace Helmut with Güenter. While the transition was taking place, Rolf had the immense pleasure of being able to share the stage for a couple of gigs with the initimable Helmut. “He was doing the stiff-legged Heil-Hitler Marchstep across the stage,” Rolf recalls, “and I thought that was one of the greatest things I had ever seen. That instantly earned him immortality in my book.“

Earlier in his performing career, many of Rolf’s mentors pointed out the need for a performing musician to also entertain; to give the audience an experience to remember. That was the modus that Rolf brought into the group. It seemed to him that a greater interest in the group could be generated if the fans who came to the gigs could be given a sense of every show being a special one. “I didn’t have a clear agenda to contribute to this band, other than just to continue the original band's mission of slippery fun and to give our audience something to tell their friends about,” Rolf remembers. “I knew my band mates were searching themselves, and I thought it would be a blast to just go along for the ride and see what kind of antics we could make happen next.”

So, one of the first things Rolf thought of was to take some of his costumes from one of his other gigs, that as tuba and tombone player for the renowned Kewaunee Chambermaids, and develop (another) alter ego within the Schnappers, a feisty dirty-blonde named Hilde. “Hilde was the name of another army band friend of mine I served in Germany with,” Rolf recalls. “My creating that persona was likewise kind of a tribute to her; she was a great lady. As I've said, it was also done with the idea that our very loyal fans deserved something new and memorable every time they came to see us. It wasn’t fair to them to just do the same old routine, so I spiced it up.” Spice, indeed. Take that, Sporty.

So fans were introduced to Hilde when she appeared out of nowhere in a big white wedding dress, complete with face-covering veil, at the Schnappers’ appearance at the Manitowoc County Fair in 1994, patiently waiting for Rolf to show up so they could get married by the Big Eli ferris wheel behind the stage. Rolf did eventually show up, a little worse for wear, after the gig; by then, fans had received notice that something new was brewing within the Happy Schnapps Combo camp. Hilde did make several more appearances with the Schnappers, including a notable St. Patrick’s Day party at Studio Eight the .

But even as Rolf was helping to bring the band new friends and new experiences, Old Mr. Life was busy in the background. When the band took a break in January of 1995 to get some health issues addressed, Rolf ended up in the mental health ward of following a post-surgical allergic reaction to codeine. “The guys came to see me,” Rolf states, “and I think the sight of me in a mental-ward hospital gown freaked them out a little, after what happened to Otto. I must say, though, they were nothing short of totally supportive, especially Güenter. I will always be most grateful to all of them.”

So for the next couple of months Rolf got back in the swing of things by discreetly keeping his giant plastic mug full of NA beer, preserving the drinking persona of the band to the public. As he got healthier into the spring, though, the libation content returned to the real thing, and the revelry was back in full swing.

Little did Rolf know at that point, however, that the band was pursuing other directions. “I wasn’t providing any new material to the band,” Rolf says, “and it was getting to be time for them to write and record more songs for another CD.”

Unbeknownst to Rolf, the others in the group started speaking with Shawn Sargent about taking his place to serve that purpose. So when the band took another break after a final gig at Spirits in in June of 1995, they announced at a band meeting that Rolf’s days as a Schnapper were through.

“It was emotional for me,” states Rolf, “but I understood why they did it the way they did. I thanked them by reminding them of what happened in the Disney movie “Cinderella” after her big night ended. She simply looked up in the sky and said, ‘Thank you for all of that’. No matter what happened after that, I still had my friends and my memories.”

Many years later, Rolf is still fond of those memories. “There's no good reason to be bitter about any of it at this point, even though I wrestled with a lot of those feelings,” he says. “ It was a once in a lifetime chance to do something really fun and unique, and even though it was very difficult, I made a special point to continue my friendships with the guys in the band, and support them however I could. I am still proud to call all of them my friends.”

Rolf’s moved on to greener pastures; in 2005 he left the Wisconsin Lakeshore area and is now looking for quality gigs in Northwest Iowa and, eventually, beyond. “I’m confident I have a lot of great times ahead of me yet,” he states. “I’m just keeping my eyes open and one foot in front of the other. I miss my friends, but they’re always with me.”

terribletee56
Isle, Minnesota, United States
Musician, Nature Enthusiast, Pundit, and Liberal Political Junkie. Native of South Dakota. Studied music under Dr. Darwin Walker and many other fine teachers at SDSU in the '70's. Toured the world for 6 years in the Army Band system, living and performing in Missouri, Virgina, Germany, Kansas, Chicago, and Seoul. Lived, worked, and performed in Manitowoc County, Wisconsin for 20 years. Moved to Iowa in 2006, and then East Central Minnesota in 2015. I gladly and professionally perform all styles of music on low brass and bass guitar; and yes, I am currently for hire. If you want the best and you can afford me, I'm your guy.